The most common weapon is the XMP. It is fired to destroy an enemy portal.  It is a weapon designed to overload and blow up the resonators that hold the portal to a specific faction

There are other available weapons to choose from, below is a complete list

There are a few different weapons available to you, as shown above. The most common is the XMP, so we will start there.

The XMP is a 360° Weapon. It fires a pulse from its orgin out in all directions. The center most point is its strongest damage point and the farther it goes, the weaker it gets. Each Burster has a different range depending on its level. When attacking a group of Portals it is best to wait until you are in the center so you can maximize the damage from minimal fires.

The second is the Ultra Strike. It can only be hacked from a specific phone (promo from motorola). The Ultra Strike is a highly focused weapon designed to target specific resonators on a Portal. It looks to create a small black vortex below its detonation point.

The next two weapons are in the same family, the “Virus“. There is an ADA Refactor and a Jarvis Virus. The ADA Refactor is a virus weapon used to re-align a Enlightened Portal to Resistance. The Jarvis Virus is used to re-align a Resistance Portal to Enlightened. They are bothvery rare and useful to each faction. Below I will break down each weapon and explain how to fire them and some basic information. 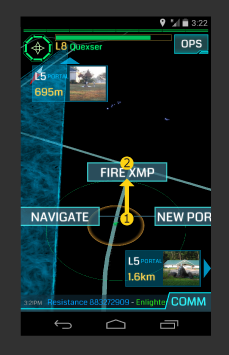 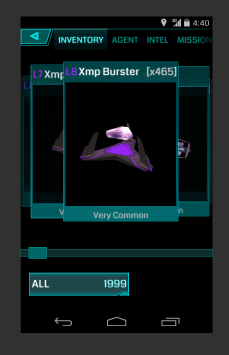 There are two methods to open the firing screen,

one is to long press the screen until the menu pops up and slide up then release.

Each method will bring you here… 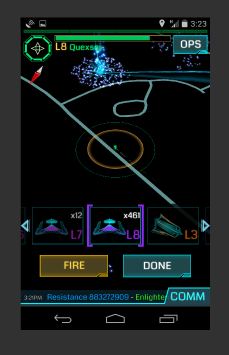 And Blast away…At any time, you can scroll to a different weapon and resume.

The Ultra-Strike is concentrated XMP Burst, and while targeted to a particular resonator will do small amounts of damage to surrounding the resonators depending on level of the Ultra Strike fired. 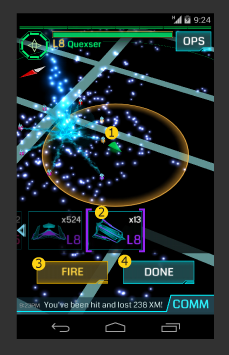 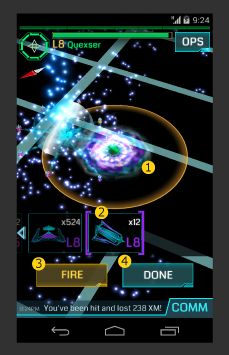 If resonator is not destroyed repeat

If successful, move location to target a new resonator

Keep moving positions till all resonators are destroyed

Only the Droid Ultra, Droid Maxx and Droid Mini can hack it. 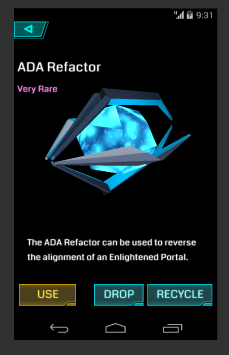 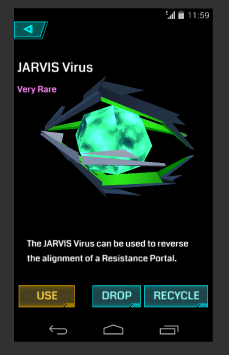 The Jarvis Virus is an item that can flip the alignment of a portal from Resistance to Enlightenment. It’s a very powerful weapon and so far there is no protection against it. And it can also be used by Resistance agents as well! If you are with the Resistance and for some reason you want to switch a portal to Enlightened, Jarvis will be owner of that portal. If you are Enlightened, portal, resonators and mods will be under your ownership

The ADA Refactor is an item that can flip the alignment of a portal from Enlightened to Resistance. It’s a very powerful weapon and so far there is no protection against it. It can be used by Enlightened agents also! If you are with the Enlightenment and for some reason you want to switch a portal to Resistance, ADA will be owner of that portal. If you are resistance, portal, resonators and mods will be under your ownership.

Note: All links and fields will be destroyed with NO AP gain to user 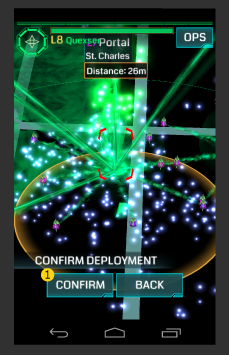 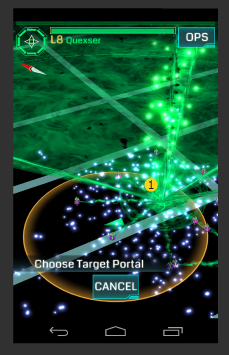 Choose which Virus suits your need and tap USE

Alright, you now need to choose the target by tapping on the Portal withing the action range

It will also recharge all resonators to full charge

Not sure if Mods are restored to full health…

There is a One Hour Immunity from another Virus attack, Attacker will loose their Virus and the attack will fail.